Four weeks today, Spud (nicknamed due to her potato shaped head) shot into the world (you can read the birth story here) and, as expected, it’s flown by in a whirlwind of feeding, nappies and trying to navigate the world with two children. 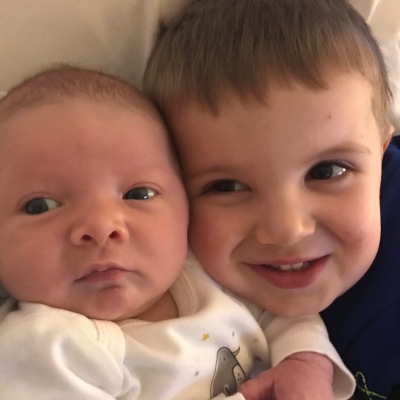 The first week was dominated by Christmas and the New Year, punctuated by visits from friends and family. We also managed some lovely time as a four, cuddled up watched films, playing Orchard Games with our son and we even went bowling!

Little L has adapted to having a baby sister better than either of us could have every imagined. I had so many worries whilst pregnant regarding him feeling left out, not wanting to share us etc but actually he totally adores our little Spud. He is unbelievable helpful, whether it be putting nappy bags in the bin, rocking the car seat (she’s not at fan at first) or gently pouring water over her belly in the bath. He constantly wants to kiss and cuddle her which is lovely but I’m struggling with the balance between letting him and her not being overwhelmed or smothered!

Our daughter is mostly chilled but is suffering with a bit of trapped wind meaning that she is constantly trumping, trying to trump/poo and grunting. She has took to breastfeeding like a pro and was at her birth weight when weighed on the fourth day, which was followed by a 12oz gain within the week that followed. I have to say that I was pretty proud of my Mummy milk when I found that out and I love how chunky she is…apart from when I have to clean her smelly neck rolls – vom. I was most surprised that we have also experienced her first smile in her third week! clever little sausage! Sleep wise – I am actually sleeping better now when I was pregnant! I will NEVER take sleeping on my tummy for granted ever again! I can get comfy and I’m content, so no crazy thoughts going round in my head caused by my anxieties in the Third Trimester. Yes, I’m woken every 1.5/2/3 hours but Spud goes straight back in her crib and I go straight back to sleep so I’m not feeling that sleep deprived! My husband and I have a deal that he gets a full night’s sleep but has to get up with L in the morning and because he doesn’t go to work till 9:30/10am, I can get an extra hour or so sleep then if I need it.

The best thing about this first month has definitely been watching the bond between our son and daughter. I didn’t expect it to be so soon but L’s love for his little sister is undeniable and S looks at her big brother when he talks so obviously recognises his voice from when he chatted to her when she was “on the inside”. The hardest thing about the last month? Probably the evenings or days when it’s just me and the kids. Once we fall back into a routine it will be fine and we’re lucky that Little L is a star at bedtime and knows his routine but is also at the age that an extra five minutes won’t matter too much. I’m trying to make sure he knows I’m still available for him, even if feeding so he doesn’t think his sister has took his Mummy, still being able to give him cuddles, read a book etc but it’s definitely a juggling act…that I’m hoping will get easier with time.

One thing is for sure, Little Miss Potato Head has completed our family and, so far, the jump from three to four hasn’t been too harrowing. In fact, the baby is easier than the three year old on some days, although I doubt that will be the case when teething hits!

0 thoughts on “A Month With Spud”

Find someone who looks at you the way Lucas looks

LET’S HAVE SOME FUN! HOW MUCH MONEY IS IN THE JA

An early morning trip to the doctors today as I’

Day three or half term and we’re surviving! How

Lucas came to work with me today. He had a hard da